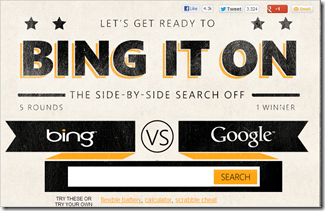 BingItOn.com is another wasteful exercise by the Microsoft Bing team which attempts to con users into believing that its results are superior to those of Google’s Search product.

I remember travelling to Seattle 5 or 6 years ago and seeing this tool used internally at Redmond - now finally it appears that the mighty Redmond marketing machine has unleashed it upon the public at large.

The premise of this tool is that you run a search and two sets of results are returned - one from Bing and one from Google.  You are then asked to make a choice about which set of results is more useful.

There are two problems here.  First, Microsoft simply needs to turn its back on some of these old Ballmer fights and look instead to the future.  Get back to innovating and delighting customers and walk away from this sort of stuff.  They really don't need to fight meaningless fights just because Ballmer made some dumb promise all those years ago.

Second, how relevant is it to make a choice when you strip away the added value pieces that Google delivers to me in a normal search?  Things such as personalized search results and added context through their knowledge graph enhancements.   For example, when I run a search using the Microsoft BingItOn tool for AFL Football legend “Buddy Franklin”, I receive two walls of results: 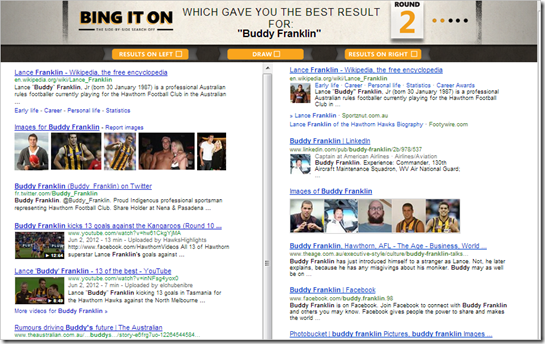 Picking through them both to find a winner is tough and quite subjective.  But let’s see how the results actually appear when I do the search on the actual site’s:

First I use Google and we can see that the results which are presented are far more useful than what is simply presented in the BingItOn tool.  I’m given personalized results which are more engaging, presented better, and which have added context and knowledge about the topic.

Contrast that with a search on Bing.com and we can see Bing doesn’t actually make it much easier than the BingItOn tool: 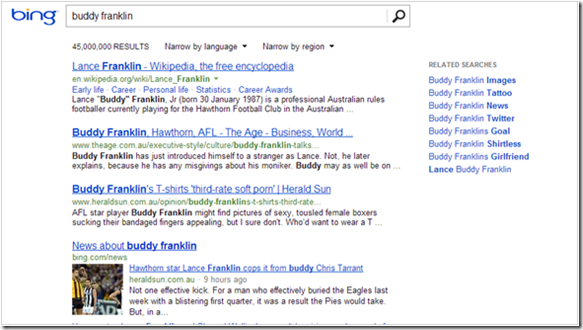 Less engaging, less relevant, and potentially a lot more work to do on my behalf to get a result that I might be interested in.

Here I repeat the result by searching for the term “Adelaide Crows Players” and let’s look at the results:

Google presents me with a scrollable list of the current players with their playing positions at the head of the SERP.

With Bing on the other hand, it appears that the first half dozen results might even be advertisements: 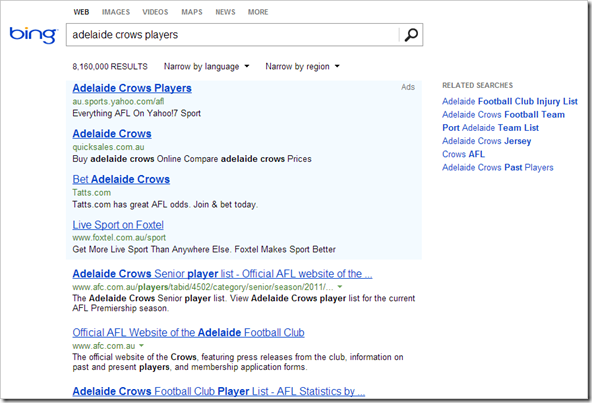 Yet run it in the BingItOn tool and the results are far less clear: 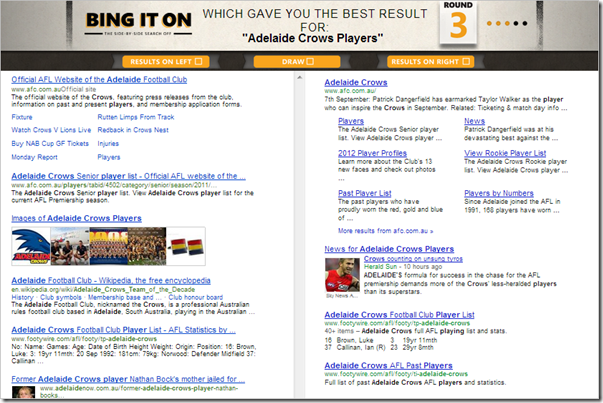 So the message that I take away from the BingItOn tool is this... if we strip away all the stuff that makes Google search great and dumb it down to a certain level, which search engine do you prefer.  It's not even a valid question to ask!